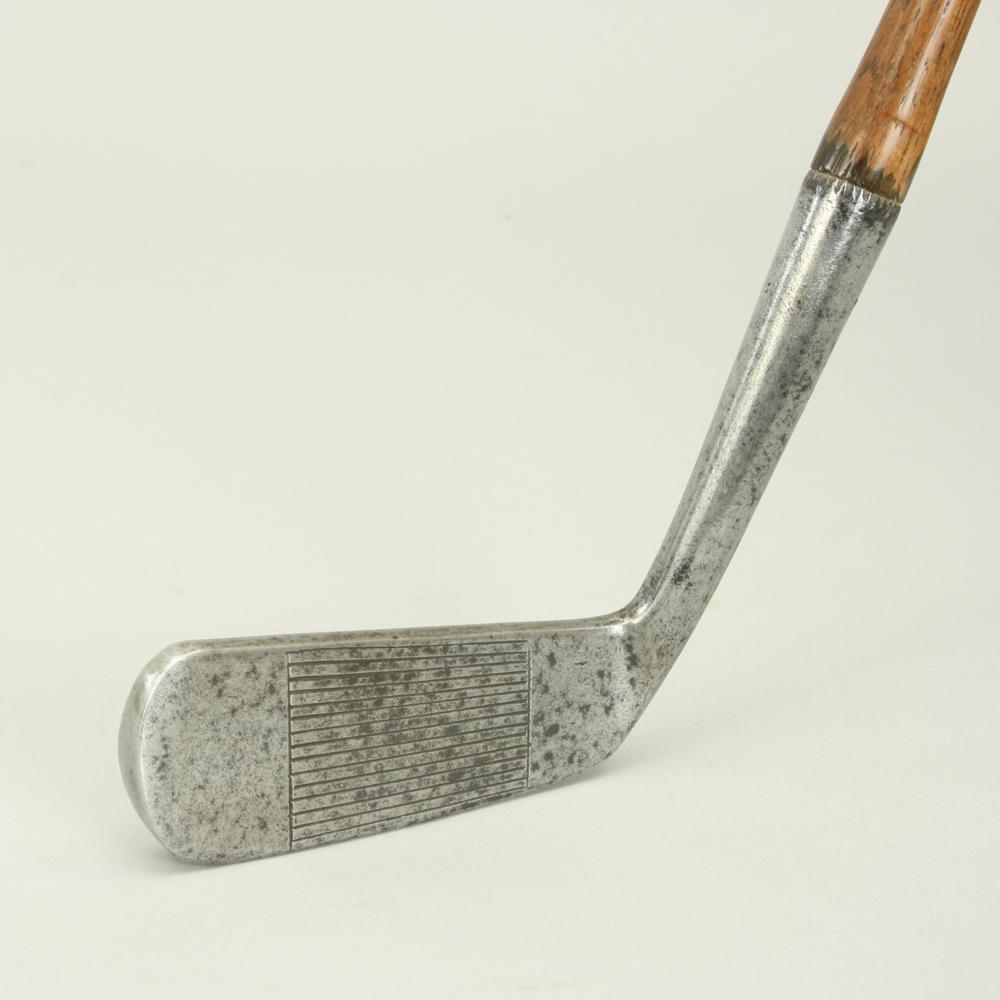 Antique Hickory Golf Club, Putter, St. Andrews, Bobby Jones, R. T. J.
A rare Bobby Jones putter by Tom Stewart, St. Andrews. Hickory shafted putter with line face markings and suede leather grip. The rear of the club head is marked with the 'PIPE' cleek mark of Stewart, the initials 'R. T. J.' for Robert Tyre Jones Jr. and the golf professional, Fred Robson, of Cooden Beach Golf Club, Bexhill – on - Sea. Bobby Jones was an avid user of Stewart's clubs, in-fact he had commissioned Stewart to make a single set of clubs to his own specifications. Tom saw a wonderful marketing opportunity here and continued to produce these clubs in 1930 for general sale, marking them with Jones's initials 'R. T. J.'. As no authorisation was given by Jones for the production of these clubs the 'RTJ' replicas were stopped very shortly after they went on sale when Jones wrote to Stewart telling him to cease manufacturing his 'personal' clubs. With this very short production line of not even a year there can not be that many of these wonderful clubs in existence.

The cleek mark on the rear of the club head is the plain 'pipe' mark of Tom Stewart, Jr. (1861 - 1931), which was in use from 1893 - 1905. Tom learnt some of his club making art from his father who was a carpenter and occasional club maker. He served his apprenticeship with one of St. Andrews most prolific iron club makers, Robert White.
In his early days one of his best customers was the shop of Tom Morris, Old Tom even played with irons made by Stewart. Other well-known customers were the McEwans in Musselburgh as well as D. & W. Auchterlonie and Robert Forgan in St. Andrews.
Tom Stewart was one of the best Iron club makers and even today's hickory players are always on the search for Stewart clubs.

Robert Tyre "Bobby" Jones Jr. (1902 – 1971) dominated the top-level amateur competitions from 1923 until he retired in 1930, often beating the pros of the day like Walter Hagen. Jones earned his living as a lawyer and played golf only as an amateur. Jones is famous for winning the 'Grand Slam' of golf in 1930, winning all four major golf tournaments of that era (U.S and the U.K) in the same calendar year. In all Bobby Jones won 13 majors, playing in 31 and finishing in the top in 27 of them. Upon his retirement he made his money from being an instructor and consultant for Splading, a large club making firm at the time. From 1932 Spalding produced a line of golf clubs under Bobby Jones' name up to 1970's.
Jones' other big claim to fame is being the founder of the Augusta National Golf Club and helping to start one of the most famous of golf tournaments of all time 'The Masters'. Apart from WWII Augusta has staged the tournament annually since 1934.