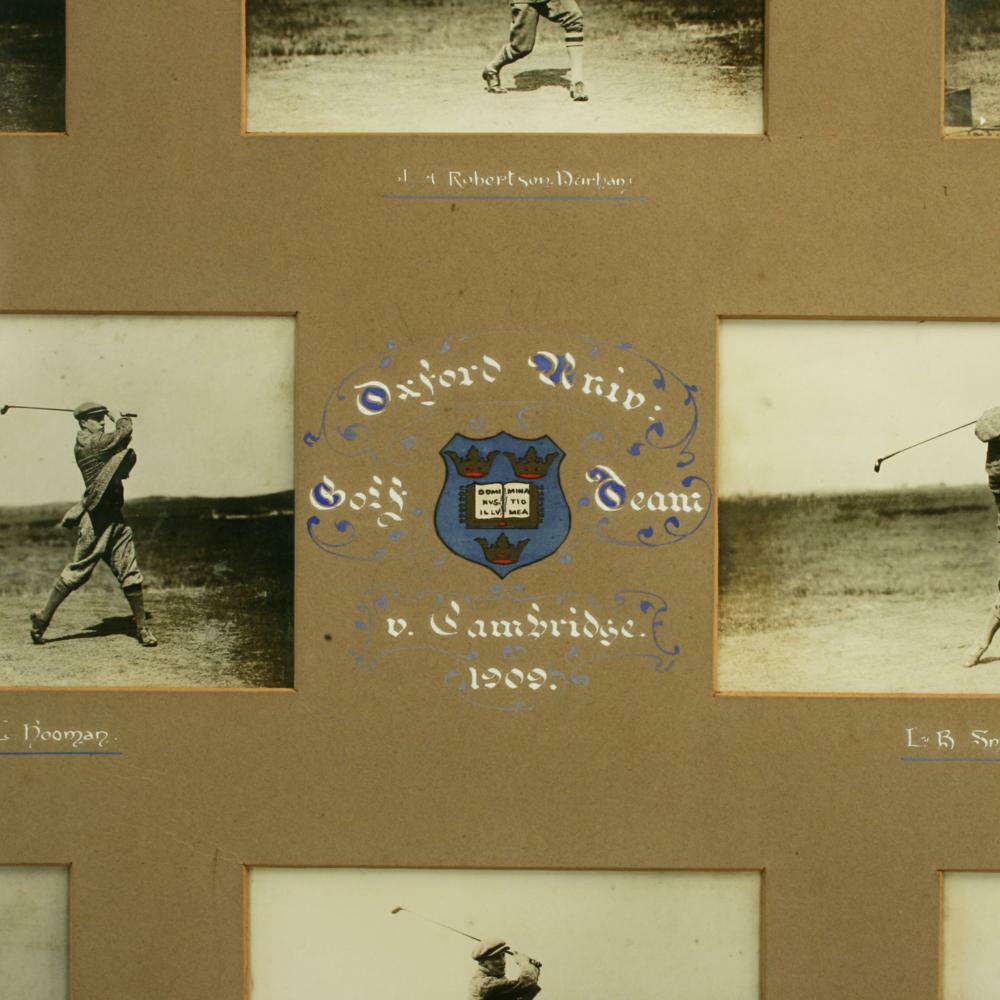 Oxford University Golf Team Photograph, 1909.
A very rare example of an Oxford University golf team photograph. The photo is of the 1909 team that was victorious over Cambridge, with the match play taking place over the Sandwich Link course. The picture is in excellent condition and in an old walnut frame with gold slip. The official photographers mount is with eight windows with individual action photos (6 X 4) of each team member, with their name below. The mount is marked 'Gillman & Co., Ltd, Oxford' with exceptional calligraphic legend to the center. The Oxford team consisted of:- P. de Putron, J.A. Roberson-Durham, A.J. Evans, C.V.L. Hooman, L. Butler-Smith, D.E. Landale, Hon. D. Finch-Hatton and C.H. Gidney. Oxford won 6 to 2.

Gillman & Co. was founded by Charles Gillman in around 1882 and he had his first shop at 107 St. Aldate's. In 1891 they received Royal recognition with their appointment to HRH The Prince of Wales. The company specialized in group portraits and sporting scenes and still operate today under the name Gillman and Soame.

Taken from the book "Fifty Years of Sport – Oxford and Cambridge".

1909
Again Sandwich was visited, and Oxford with the best side seen since 1900 scored easily. Yet just at the finish there was a chance that the teams would end all square. Macdona had pulled down Hooman's lead, and the latter was getting fidgety. His practice rounds had not been of the kind which inspire confidence, though an old ally turned up just in time to put the finishing touches on his preparation. At the critical moment he had to force himself to play well, and the classic soundness of his style pulled him through. Landale also caused his supporters some anxiety. He had been on tour with the society in Lancashire, where he had the honour of playing a single against Mr. John Ball. Three others enjoyed it, and all lost finishing power for at least a week. Landale quite out-played Walker except at the putting, but he was one down with three to go. On the sixteenth green Walker unwisely offered a half when neither ball was stiff dead. Landale, who had made a less careless inspection of the situation, declined the offer. Walker missed, and partly in consequence repeated the performance on the next green. This cost him the match. There were no other close games. Robertson-Durham gave Hammond-Chambers an awful flogging. The latter threw away the first hole by nervous play, and after that began to hit at the ball instead of through it; he had not at that time learnt the restraint which later made him so formidable an opponent. Finch-Hatton and Ireland played a wonderful better-ball game. For example, the former had threes at the ninth and fifteenth in the morning when half a gale was blowing in from the sea. Campbell caught Gidney on an off-day when he could do nothing right. Besides, the loser's drives, low-flying and far-running, did not suit the characteristics of Sandwich links. De Putron proved conclusively to Ulyat that the half-armed punch has its merits on a windy day as compared with an excessively long swing.Evans made a splendid first appearance. His driving was beautiful, and his long iron shots recalled those with which another Old Wykhamist, Johnny Bramston, discomfited Ned Scratton on the same course in very similar conditions of weather. The best golf for Cambridge was played by Tennant M'Neill. In the morning Butler-Smith, since winner of several Yorkshire Championships, had an approximate score which the least charitable estimate made out to be better than 80. Yet M'Neill was only one down at luncheon time. Afterwards he had his match practically won at the turn. He set about his business in most workmanlike fashion, and having once got a grip of his opponent refused to let him escape.