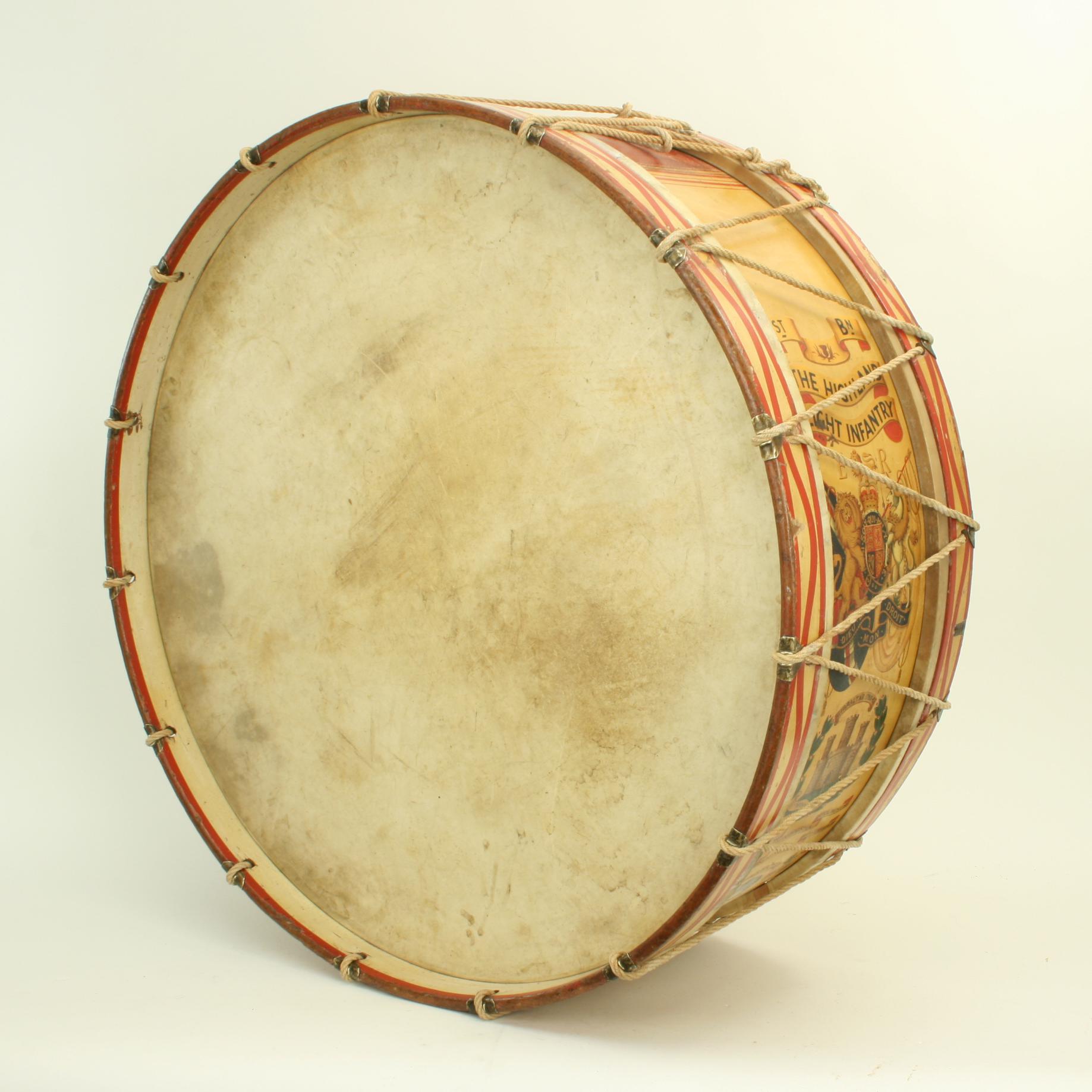 Military Bass Drum.
A very nice regimental rope tension bass drum made by Henry Potter, London. The shell of the drum has been hand painted with the Royal coat of arms and the Regimental badge and Battle Honours of the 1st Bn, The Highland Light Infantry. The Royal Coat of Arms of the United Kingdom features two mottos, "Honi Soit Qui Mal Y Pense" and "Dieu et Mon Droit", translated "Shame be to him who thinks evil of it." and "God and My Right.". The wooden case is marked with Henry Potter & Co. details and is also stamped 'Aldershot'. It is with the majority of original parts, ropes, but only one skin. With the addition of a glass top this would make a remarkable coffee table.

Inside the drum there is the original paper fitting instructions for the drum head and hand written names and dates of the musicians who have played this drum. Some of these are "Cpt. A.M.Beck KING'S CORNATION 1937, PTE A Bailey 1941-46, DARKIE ROSS MALTA 1952, Cpt. DALZIEL 1946".

Henry Potter & Co. was founded in 1810 by Samual Potter. He served in the Coldstream Regiment of Foot Guards for a period of 31 years, the latter 21 years of which he held the appointment of Drum Major. As a serving officer of the British Army, Samual was forbidden to form a company; instead he started the company in the name of his newborn child Henry on his very birth date. The expanding business necessitated moves to three premises around Westminster, but it was not until well after Samuel's death, in 1836, that Henry Potter moved to its famous shop in Charing Cross in 1860, where it was to remain for many decades.

Adapted from the Henry Potter & Co. Ltd website.
Harry and William, two of Henry's sons, carried on running the company, and a third, George, went with one drum maker, to Aldershot to open a new branch in the High Street, later to move to what became known as "Potter's Corner". As it remains today, Aldershot was one of Britain's most important military towns and with the London market nicely taken care of, George went there to exploit pastures new. Starting initially as Henry Potter in Aldershot, the companies split officially around the mid-1850's, with a developing rivalry that became fierce, but always friendly and productive. The nearest Potter's ever got to large-scale manufacture was when fifteen people were employed assembling brass instruments. Despite various busy periods, the Potter family deliberately avoided mass production, preferring instead to concentrate on highly specialist products in niche markets.

Henry Potter & Co. Ltd continues to focus on specialist products, meaning that the company can stay true to the ideals of tradition, reliability and excellence that have made its name.