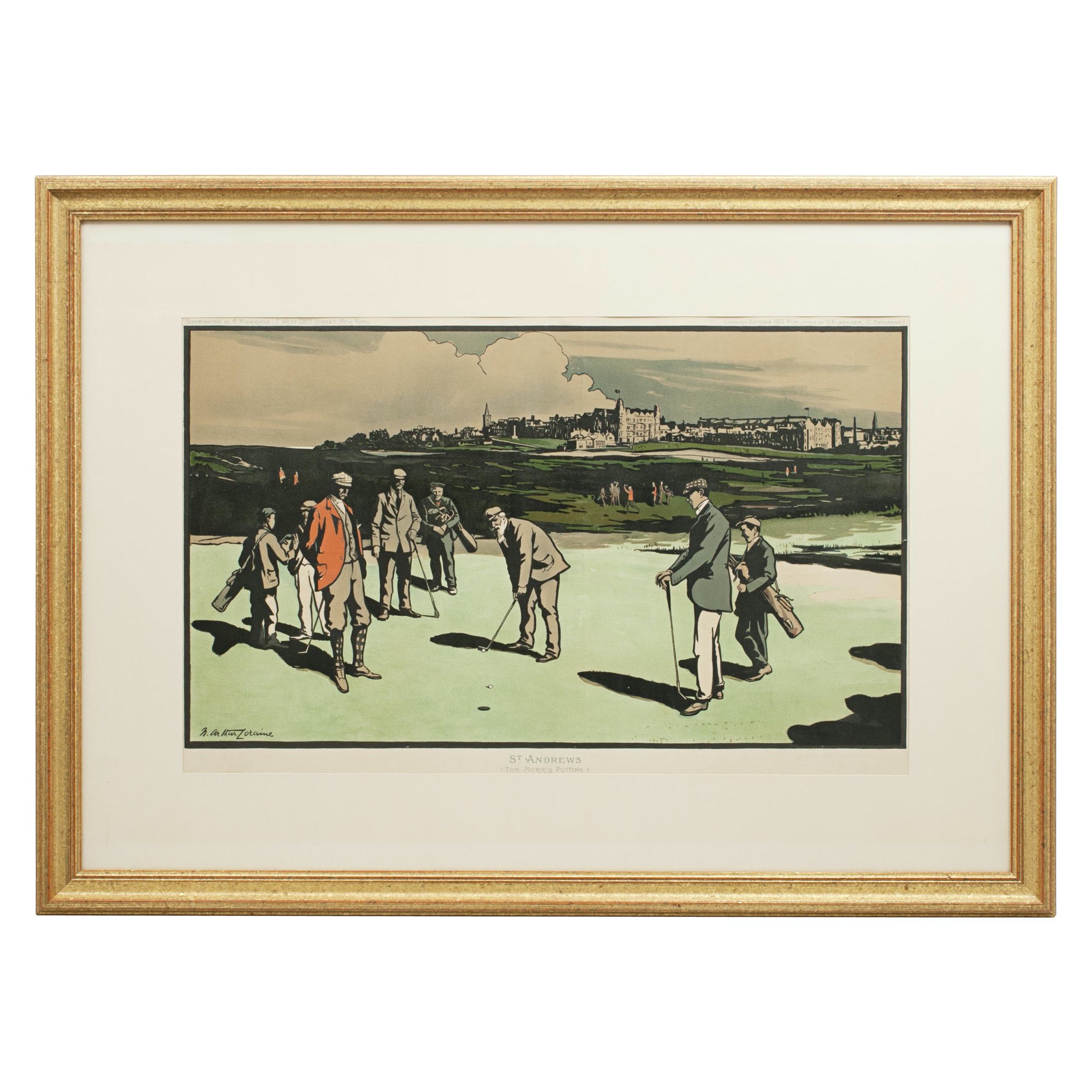 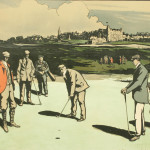 Golf Chromolithograph, St Andrews after Arthur Loraine.
A rare coloured lithograph published by C.Klackner, London entitled "St. Andrews". The picture depicts Tom Morris (stymied) about to putt in a foursomes match on the Old Course St Andrews. In the background is a good view of the R & A and St Andrews town. A printed signature N. Arthur Loraine is in the left hand corner.
An extremely rare and sought after picture.

Tom Morris, affectionately known as 'Old Tom', was a 19th century pioneer of golf. He was a great golfer with multiple wins in the British Open, as well as a club maker, a green-keeper and a course designer. He was perhaps the most influential figure in the history of golf. Tom was born in 1821 in St Andrews, Scotland, and played golf and caddied from an early age and at 14 he was apprenticed to Allan Robertson. Robertson, thought by many to be the world's top golfer, taught Tom the golf trade, from making feathery golf balls to clubs. Robertson often chose Morris as his partner in matches and according to legend they were never beaten. It is said Tom was fired on the spot when Allan caught him playing with the new style golf balls, the 'Gutty'. The gutta-percha golf ball would replace the featherie golf ball because of its cost effectiveness, and Robertson had a very good business selling the featheries and did not want his employee endorsing the new balls.

Morris was hired by Prestwick Golf Club, so left St. Andrews to become 'Keeper of the Greens' in 1851. With Prestwick just starting out Tom had to design and layout the course. He gave tuition to the players, ran events and had his own golf equipment business. He was influential in beginning The Open Championship and Prestwick hosted the first in 1860, Tom had the very first shot in that event and eventually finished second, winning the event the following year and again in 1862, 1864 and 1867. In 1865 with the Royal and Ancient calling for Tom, he returned as the greenkeeper at St Andrews. With the new skills he had learnt at Prestwick, Tom went about rejuvenating St Andrews by establishing separate tee boxes on each hole, widening the fairways, enlarging the greens and building two new ones and actively managing the hazards (before then hazards and bunkers had been left to mother nature). All of this spread out play over larger areas thus increasing the volume of golf being played at St Andrews. He also introduced the concept of top-dressing greens with sand, was the first to use a push mower to cut greens and all the time this was helping to improve the quality of the course.
Throughout his career Tom worked on numerous courses across the British Isles, amongst them Carnoustie, St Andrews, Prestwick, Muirfield and Westward Ho!. Tom introduced many of the course design ideas that are the blue print for today's modern designers, creating the 18 hole course (St Andrews had originally 22 holes) and having each nine holes return to the club house. Morris worked right up to his death, falling down the stairs in the St Andrews club house, just before his 87th birthday.

Without 'Old Tom' golf may well have been a different ball game altogether.