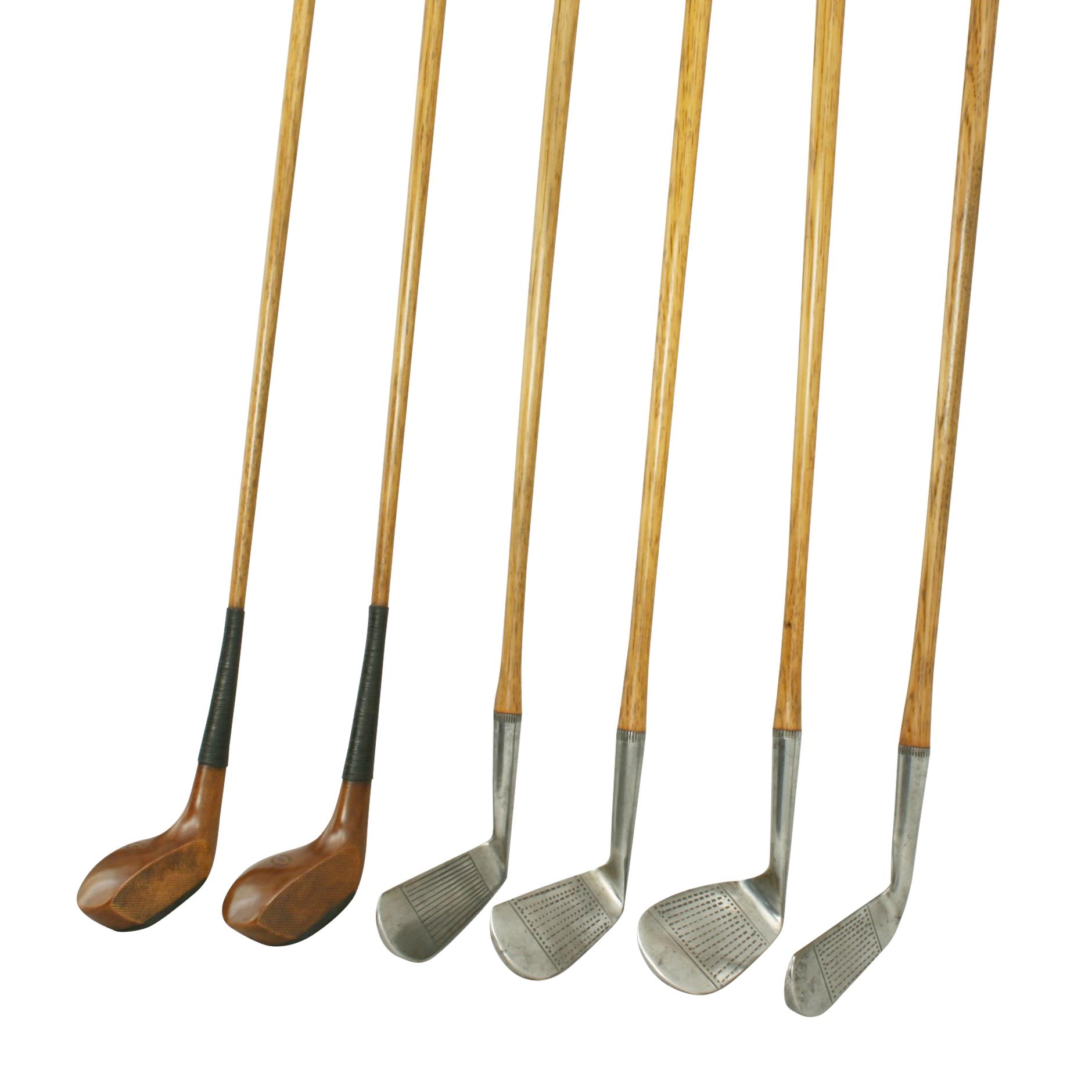 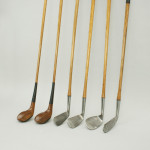 W. Horace Fulford was the first professional at Moortown Golf Club, Leeds. He was there from 1909 until 1925 and would have undoubtedly been at the opening exhibition match between the Open Champion James Braid and the legendary Harry Vardon. Fulford had previously been at Howley Hall GC from 1905 until 1907, then at Bridlington GC until 1909 when he went to Moortown GC. After Moortown he went on to Northwood GC for about a year.

The 1929 Ryder Cup was the second such competition and Moortown Golf Club, Leeds, held the very first Ryder Cup on English soil. The weather was very cold, with hail and at one point and heavy snow on the greens. In late 1928, it was announced that a selection committee of five professional golfers would choose the Great Britain team for the 1929 Ryder Cup. The committee consisted of James Braid, Sandy Herd and J.H. Taylor together with James Batley and Bob McKenzie. In January 1929 the team was selected with George Duncan being the captain. The rest of the team consisted of Stewart Burns, Abe Mitchell, Fred Robson, Ernie Whitcombe, Percy Alliss, Henry Cotton, Archie Crompton, Aubrey Boomer and it was the first time in Ryder Cup competition where two brothers, Charles and Ernest Whitcombe, competed together. It was originally planned that, as in 1927, only eight players should be used by each team. However, the American captain (Walter Hagen) elected to let all his players have at least one match, whilst Duncan only played eight, having Percy Alliss and Stewart Burns on the sidelines. The U.S. Team were Joe Turnesa, Al Watrous, Horton Smith, Ed. Dudley, Jonny Farrell, Johnny Golden, Gene Sarazen, Al Espinossa, Leo Diegel and Walter Hagen. At the start of the competition there was controversy about the American equipment. Although legal in the United States, steel shafted golf clubs were still a year away from acceptability in Britian according to the R & A's rules. Duncan was swift to point this out and refused to allow the United States to compete using their cutting edge equipment, meaning hickory shafted clubs were used by all. The Americans' Horton Smith played one singles match and played with hickories for the first time.

America gained a narrow lead in the opening-day foursomes 2 ½ to 1 ½. The matches being:-

However the singles matches swung the game in Great Britain's favour and in particular Duncan's victory over Hagen. By all accounts Hagen had suggested that Duncan and he might play together thinking that this was certain to be a point for America. In a stunning match, Duncan routed Hagen, 10 and 8. The rest of the matches were:-
C A Whitcombe beating J Farrell (8 & 6).
A Mitchell losing to L Diegel (8 & 6).
A Compston beating G Sarazen (6 & 4).
A Boomer beating J Turnesa (4 & 3).
F Robson losing to H Smith (4 & 2).
T H Cotton beating A Watrous (4 & 3).
E R Whitcombe and A Espinosa halving the match.

The Great Britain team had a score of 7 points to Americas 5, thus winning the competition and the Ryder Cup.

Taken from theMoortown GC website:-
Moortown Golf Club was formed in 1909 and the international media were invited to Moortown's opening with an exhibition match between the Open Champion James Braid and the legendary Harry Vardon. The present clubhouse was opened in 1915 and by the mid-1920s the course assumed the layout, which was to exist without major alterations for over sixty years. Even in those early days Moortown's popularity among professionals was growing through the Yorkshire Evening News Professional Tournament, but it was the staging of The Ryder Cup in 1929 which focused the attention of international media on the Club.
Moortown Hosts the First Ever Ryder Cup on European Soil.
The one event which, has contributed so much to Moortown's reputation as a championship course was the staging of the Ryder Cup in 1929. At a meeting at the Club in 1928 Kolin Robertson explained how he had arranged for the Ryder Cup to be played at Moortown.
This was accepted and a sub-committee comprising K Robertson, J L Kirby, J. Lawson-Brown, and J F White was set up to deal with the organisation. Months were spent in bringing the course up to first-class condition, and even with the vagaries of the weather this was achieved. "The course was in perfect condition and the greens beautiful", E M Cockell wrote in the Golf Illustrated on May 3rd 1929.
Unusually for that time of the year the course played fast and 70 was often broken by the players. Most of the golf writers quoted a strict par of 69. To this day the Ladies' section plays annually for their own "Ryder Cup", donated by Samuel Ryder to the ladies of the Club for all their help and support during the event.

The two teams who contested for the very first Ryder Cup on English soil.
The British Ryder Cup Team
Stewart Burns, Abe Mitchell, C. A. Whitcombe, Fred Robson. Ernie Whitcombe, Percy Alliss, George Duncan and Henry Cotton. Sitting: Archie Crompton and Aubrey Boomer.
The U.S. Ryder Cup Team
Joe Turnesa, Al Watrous, Horton Smith, Ed. Dudley, Jonny Farrell and Bob Harlow (Manager). Johnny Golden, Gene Sarazen, Walter Hagen, Al Espinossa and Leo Diegel.
The Match
The largest crowd that had ever attended a golf tournament in the U.K. with over fifteen thousand being present on the Saturday afternoon, witnessed a series of thrills such as no golf contest had ever seen before. Both captains arranged their pairings in the foursomes with considerable care, and the balance of the foursomes turned on the top match of Compston and Whitcombe against Farrell and Turnesa which finished all square. It was however the Singles which swung the match and in particular Duncan's victory over Hagen by 10 and 8, after Hagen had suggested that Duncan and he might play together.

Taken from the PGA website for England and Wales (North):-

The iconic Leeds Cup, professional golf's oldest trophy, is set to return to its spiritual home after an eight-year absence, the tournament will be staged at Cobble Hall.

The parkland course, situated on the north side of the city and founded in 1896, staged the tournament for the first time 1902 when the great Harry Vardon won. Penrose Green, president and subsequent Lord Mayor of the city, presented him with the magnificent trophy, which is showcased at The PGA's Belfry headquarters because of its value.
Vardon's winning score over two rounds was 149 followed by Alex Herd and J.H. Taylor who were four off the pace.
Apart from Vardon, many other famous names have been inscribed on the cup including former Open champions, Ryder Cup players and well known club professionals from both sides of the Pennines. In the early years the competition was played alternately in Yorkshire and Lancashire.
Prize money in the early days was distinctly ungenerous and yet the tournament attracted most of the big names of that era.
It is recorded that in the 1911 tournament, the Leeds Club had generously given £18 to provide £2 each for the first 14 players who would qualify for a foursomes competition at Walton Heath.
The PGA had provided £20 in prize money for which £4 was voted as assistant's prizes, divided into four prizes of £2, £1, 10s, and 10s.  Penrose Green also donated a prize of five guineas to any player breaking the course record of 72.
It was won by Horace Fulford of Moortown, with an afternoon round of 71. The previous record of 72 was set by Leeds Golf Club professional, Mr Caird, on November 3, 1901.