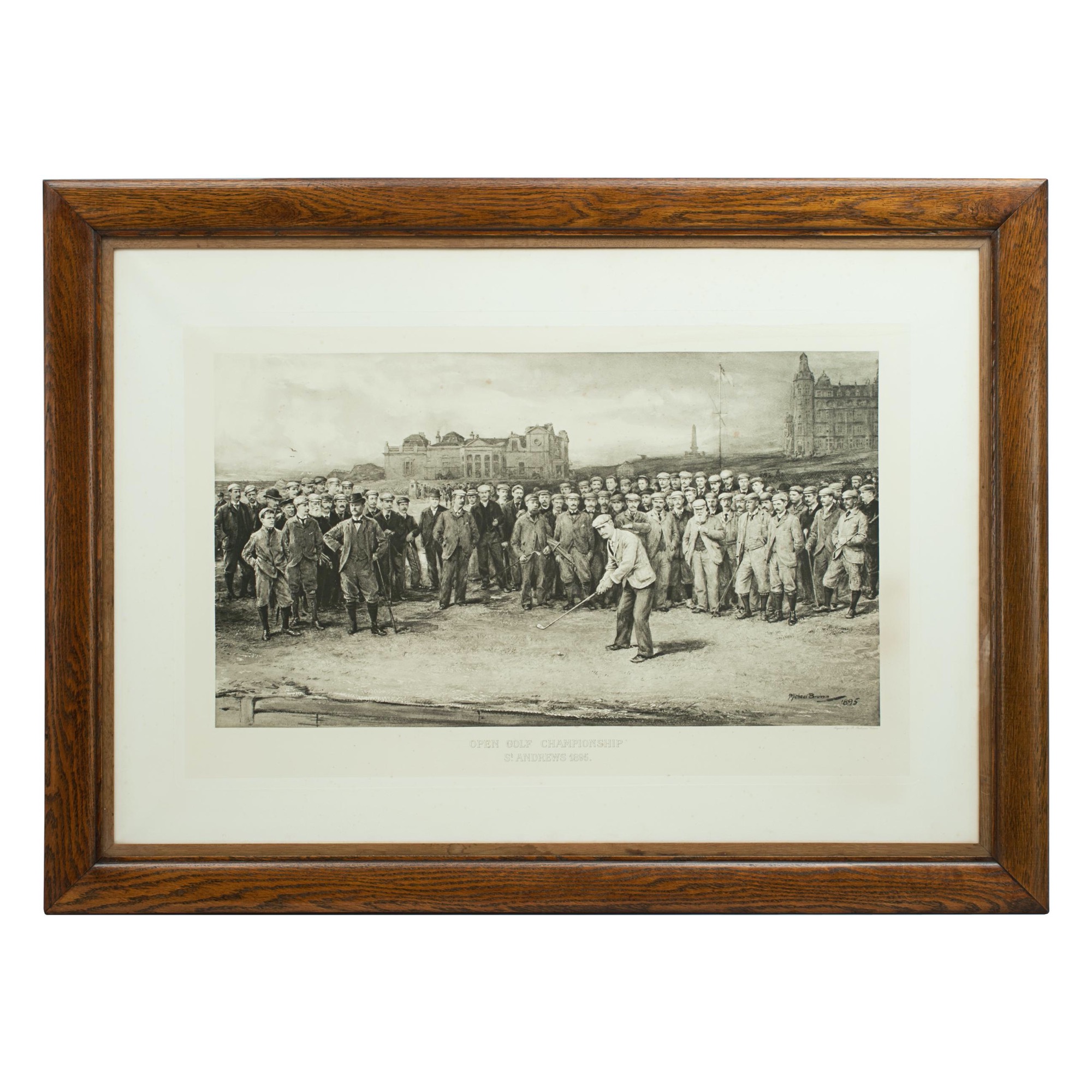 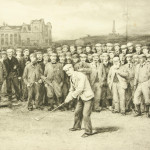 Michael Brown, 'Open Golf Championship' Photogravure.
A very large impressive golfing photogravure titled 'Open Golf Championship, St. Andrews 1895'. This is a wonderful large scale study of all the top golfers of the later nineteenth century assembled on the course at St Andrews, the Clubhouse in the background, watching J. H. Taylor about to play his approach shot over the Swilken Burn to the first green. He went on to win the Championship and was the first Englishman to win the Open in Scotland. During this Championship he used the 'mashie' (a new club) to great effect for playing approach shots, with back spin, to the green. Following his victory this club was in great demand. Also portrayed watching are over 60 top golfers of the day, including Tom Morris, John Ball, Harold Hilton, James Braid and Harry Vardon. The picture is taken from the original painting by Michael Brown and is engraved by R. Paulussen, Vienna.
Originally at the time there would have been a key to identify all the golfing personalities.

The Open Championship was inaugurated at Prestwick in 1860, where it was played until 1872. After that it alternated between Prestwick, Musselborough and St. Andrews until 1891.

St Andrews "The Home of Golf" is on the Fife Coast of eastern Scotland and is considered the oldest and most iconic golf course in the world. The Old Course is 6721 yards with a par of 72. It is famous for the 'Swilcan Bridge' spanning the first and 18th holes and 'Hell Bunker'. Everyone who plays the 18th hole walks over the 700-year-old bridge, with it featuring in many iconic pictures of St Andrews. The Old Course remains a public golf course, open to all and apart from the clubhouse for the Royal and Ancient, there are clubhouses overlooking the links for The St Andrews Golf Club (1843) and The New Golf Club St Andrews (1902) for men and the St Rule Club (1896) and St Regulus Ladies Golf Club (1913) for women.

The Old Course was pivotal to the development of golf and how the game is played today. By 1754, St Andrews consisted of twelve holes, ten of which were played twice, making a round of twenty-two holes in all. The members deciding that the first four and last four holes on the course were too short combined them into four holes (two in and two out). St Andrews then became the first 18-hole golf course in the world, and a blue print for the modern course.

In 1863 the R&A appointed 'Old' Tom Morris as Custodian of the Links and with the skills he had learnt at his time in Prestwick, he went about rejuvenating St Andrews. He established separate tee boxes on each hole, the fairways were widened, the greens enlarged and two new ones were constructed. The hazards were actively managed (before then hazards and bunkers had been left to mother nature) all of this spread out play over larger areas, thus increasing the volume of golf being played at St Andrews. Tom introduced the concept of top-dressing greens with sand, was the first to use a push mower to cut greens and all the time this was helping to improve the quality of the course. He also owned a shop and workshop at 8 The Links, which still exists.