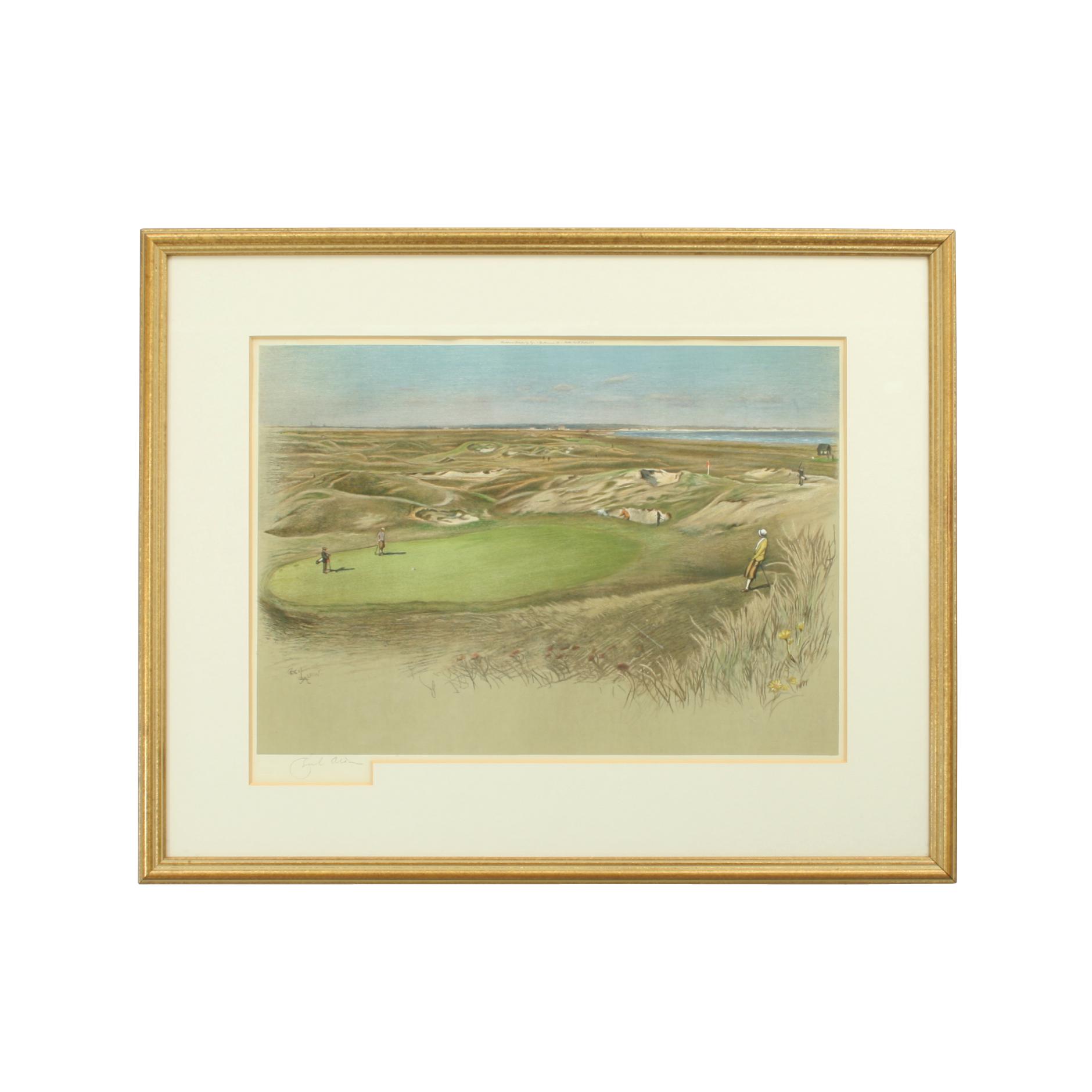 Royal St. George's after Cecil Aldin.
A mounted and framed golf photolithograph of Royal St. George's, Sandwich, "The Maiden" green after C. Aldin. Signed in pencil by the artist. Printed and published by Eyre & Spottiswoode, Ltd., His Majesty's printers. 4 Middle New Street, London, E.C.4.
Aldin produced few golfing works and this example is one of a series of six golf course views "Six Famous Golf Courses" published in the 1920's.

Founded in 1887 and intended by its founder Dr William Purves to be a rival to St Andrew's in the South of England, St George's is consistently ranked amongst the leading courses in the world.

The Club occupies a unique place in the history of golf, for it was here in 1894, that the Open Championship was first played outside Scotland. In that year, the great J. H. Taylor was the winner but there have been thirteen other winners over the years, most recently Darren Clarke in 2011.

In addition to the Open Championship, the Club has hosted the British P.G.A. Championship on five occasions, the Walker Cup twice, a victorious Curtis Cup in 1988, and has been the venue for the British Amateur Championship on no less than thirteen occasions. Winners at the Club are a veritable Who's Who of golf; Jack Nicklaus won the Grand Challenge as an amateur, Nick Faldo and Seve Ballesteros have both won the P.G.A. Championship here, Darren Clarke, Sandy Lyle, Bill Rogers, Bobby Locke, Reg Whitcombe, Henry Cotton and the great Walter Hagen have all won an Open Championships on the links. Tony Jacklin won the Dunlop Masters at the Club in 1968 when he had the distinction of achieving the first hole in one to be seen live on television. With such a record, it is hardly surprising that the Club is steeped in history and tradition, and even the most casual visitor cannot fail to be aware of this.

The layout of the course has not changed greatly in the last 129 years, and provides a stiff but fair test to professional and amateur alike. No two successive holes play in the same direction, making the ability to play shots in all wind conditions a necessity to score well. Members and visitors come from all over the world, to enjoy a world class golf course and the unrivalled standards, ethos and welcome that St George's offers.