Motoring Prints of Racing Drivers Past and Present by Sallon 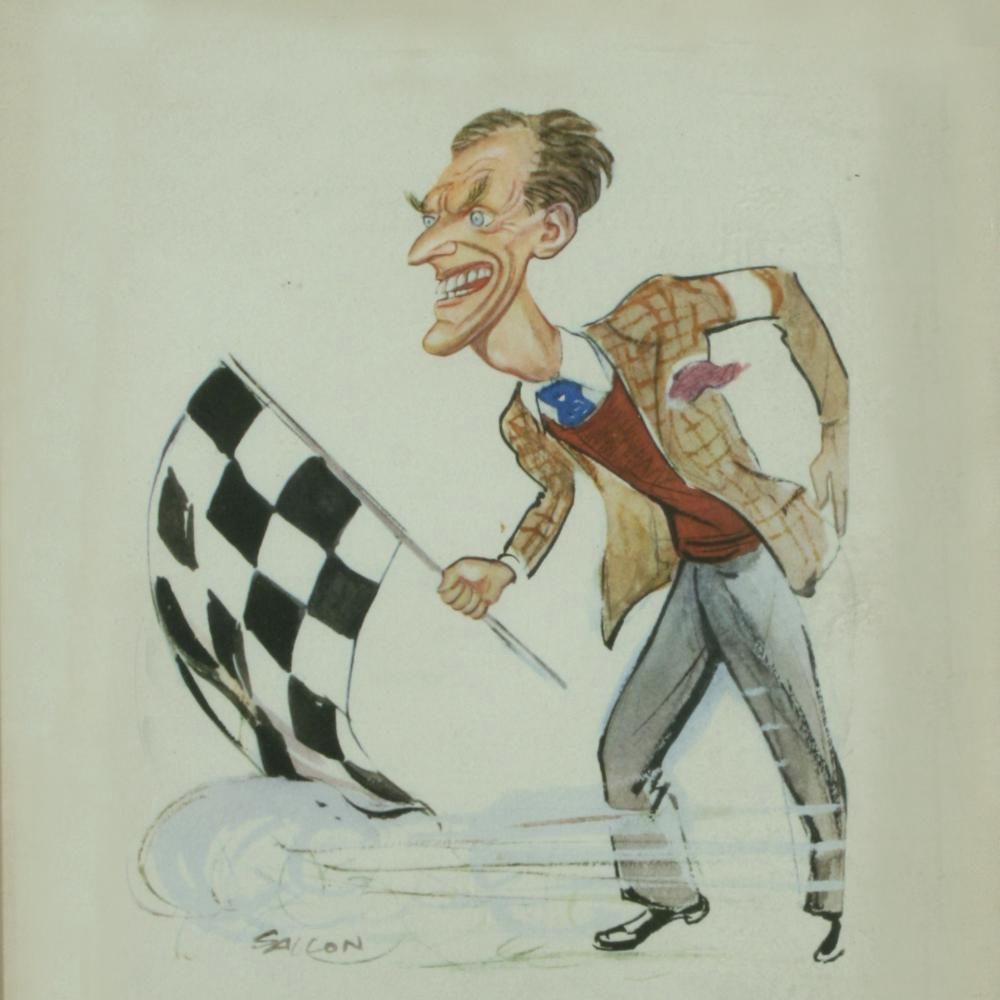 Motoring Prints of Racing Drivers Past and Present by Sallon

68 FRAMED VINTAGE HUMOROUS CARICATURES OF "MOTOR-RACING DRIVERS PAST AND PRESENT" BY SALLON.
A wonderful set of 68 framed colourful humorous motoring caricatures by Sallon of the Daily Mirror. These prints are taken from the book "MOTOR-RACING DRIVERS PAST AND PRESENT" published by Shell-Mex and BP Ltd, London, in 1956 and illustrated by Sallon. Each drawing is accompanied with some informative text on the individual driver. Amongst the many drivers illustrated are Colin Chapman, Mike Hawthorn, Les Leston, Stirling Moss, Roy Salvadori, Jim Russell and W. O. Bentley. A few of the prints have had some hand written text added about the date and way in which the driver died.

Ralph Sallon was born in 1899 in a village near Warsaw, Poland (then controlled by Russia). He was a twin, one of eight children, and the family came to Britain in 1904 and settled in London's East End. He attended Crouch End School and the Hornsey School of Art. Sallon left art school in 1914 after one term and worked in a canning factory and then as a clerk in Gamages department store. On his eighteenth birthday in 1917 he was conscripted into the British Army but in 1922 he was offered a Government-sponsored free passage to South Africa, settling in Durban. He worked for his uncle and whilst there began contributing freelance cartoons to The Natal Mercury. These proved popular so he decided to return to England and in 1925 and enrolled to study fine art at St. Martin's School of Art. However, he abandoned his studies when he was offered a job as a staff artist with Everybody's Weekly producing a weekly caricature of people in the news. Largely self-taught as a caricaturist, Sallon was initially paid only a very small fee, but remained with the magazine for twenty years. In 1930 he also became resident caricaturist on the Jewish Chronicle - a relationship that would last more than thirty years, he also contributed drawings to Tatler, Bystander, Illustrated Sporting & Dramatic News, Daily Mail, Daily Sketch, Reader's Digest, The Sunday Observer and the Daily Express.
During the outbreak of World War II in 1939 he produced propaganda cartoons for aerial leaflets for the government. In 1943 he began contributing regularly to the Daily Herald, and for the first time was on a fixed salary. In 1948 he became staff caricaturist on the Daily Mirror, where he remained until 1991. As well as his newspaper contributions, he also worked in advertising for the GPO and others, produced anniversary books of "Motor-Racing Drivers Past and Present" (1956) and "Motor-Cycling Personalities Past and Present" (1957) for Shell-Mex/BP and two series of Vanity Fair-style full-colour caricature prints of eminent lawyers (1962) and Lord Chancellors (1989) for Butterworths. It is said the Queen Mother was a fan of his Daily Mirror work and that she personally recommended Sallon for an MBE in 1977.
Sallon died in October 1999.