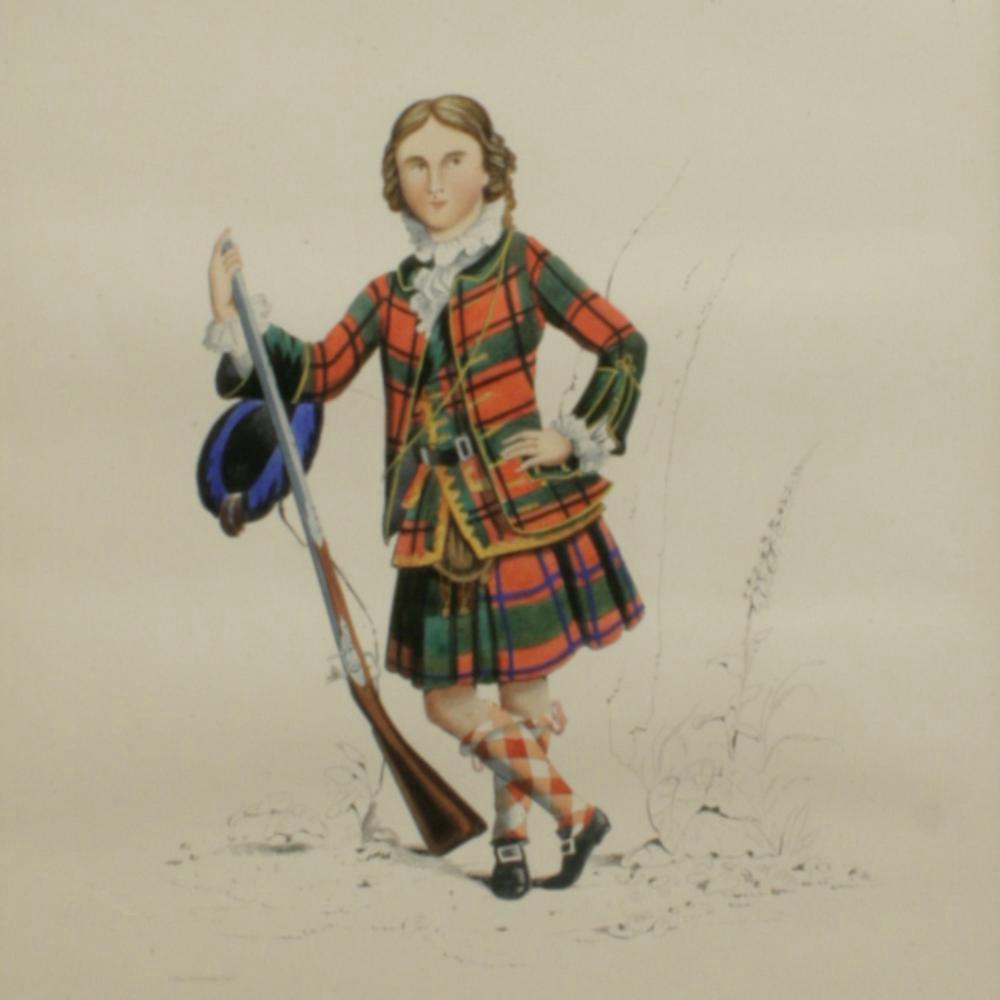 Shooting Engraving.
A fine framed engraving depicting a young Scottish boy shown with his gun, born 1742. The boy in question is James Macdonald son of Sir Alexander Macdonald of Macdonald, a great Highland chieftain with estates on the Isle of Skye. James had a younger brother Alexander and we have an accompanying picture (23594) of him playing golf.

There is an original painting of the two brothers together in the Scottish National Portrait Gallery, Edinburgh.

The following text was originally published in 100 Masterpieces: National Galleries of Scotland, Edinburgh, 2015.

The large double portrait usually attracts attention for the striking representation of Highland costume and also for the charming rendering of a young golfer. The pleasant image offers no hint of the troubled times in which it was painted nor of the very different destinies of the two boys that are shown. These are two of the sons of Sir Alexander Macdonald of Macdonald, the head of a powerful branch of the famous Clan Donald. The portrait was probably painted just a few years after the Jacobite uprising of 1745 when Sir Alexander unexpectedly declined to support Prince Charles Edward, siding instead with the Government. When he died in 1746, his eldest son James (1741-1766), shown here on the right, inherited his title; his younger brother Alexander (1744/5-1795) is the golfer on the left.
The Government was apparently keen to shield the Macdonald boys from disruptive Highland influence and both were sent to be schooled in England. Sir James, educated at Eton and Oxford, became a very distinguished scholar who was acquainted with several leading Enlightenment figures including Adam Smith and David Hume. His poor health encouraged him to move to a warmer climate in Italy but he died in Rome, aged only twenty-five. James Boswell, who had met Sir James at Oxford, recalled him fondly, describing him as 'the Marcellus of Scotland, whose extraordinary talents, learning, and virtues will ever be remembered with admiration and regret'.
He was succeeded by his younger brother Alexander, an officer in the Coldstream Guards, who was said to have been a very different character from Sir James. Described by one biographer as entirely 'anti-Celtic', he developed a reputation as a ruthless laird on the family landson Skye and Uist. Boswell and Dr Johnson later noted his boorish behaviour when they stayed with the Macdonalds on Skye. Macdonald was so incensed by the published account of this visit, with its derisive characterisations of him and his wife, that he challenged Boswell to a duel. Another portrait in the collection depicts Sir Alexander as he would have preferred to be known to posterity: as the proud head of an ancient clan, shown against the backdrop of the family lands on Skye.
The double portrait of the two Macdonalds as children probably dates from the late 1740s and is attributed to the Scottish painter William Mosman. The wearing of tartan was banned in the aftermath of the Battle of Culloden in 1746 but the two boys display it here with impunity, presumably through the safety of their family's recent political allegiance to the Hanoverian regime. The children wear three different patterns of tartan between them; individual family or clan patterns did not become widely established until much later in the century.

The Shot By Cecil Aldin

Signed Wildfowl Print, Pintails on the Foreshore By Archibald Thorburn