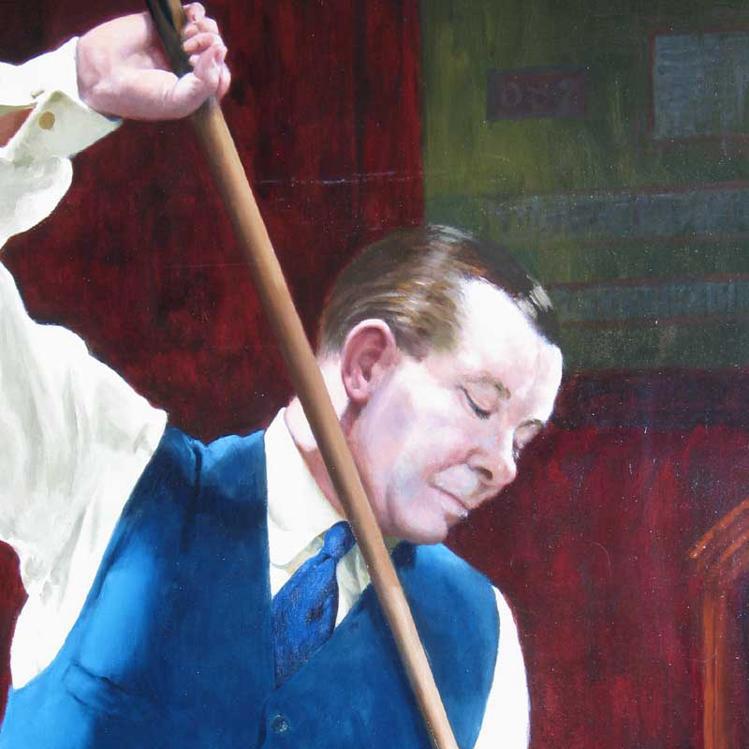 Portrait of Joe Davis.
A well executed oil on canvas portrait of Joe Davis, demonstrating the Masse shot. The painting is signed and dated by the artist, 'James Proudfoot, 1961'. The reverse of the canvas is inscribed by hand 'Joe Davis, the Masse shot, James Proudfoot, 15 Trafalgar Studios, SW3'. The stretcher and canvas are both stamped 'Prepared by C. Roberson & Co Ltd. 71, Parkway, London, NW1'.

Joe Davis (1901 - 1978) helped to organise the first Snooker World Championship in 1927 which he won against Tom Dennis. He went on to win every World Championship until 1946, when he retired from the amateur game. However, he continued to play exhibition matches professionally until 1964. Davis was also the World Professional Billiards Champion from 1928 to 1932 and was unsurpassed as a player in his day. In the 1950s, he tried to popularise a new game called Snooker Plus with two extra coloured balls, orange and purple. However, Snooker Plus was not a success and never took off. This painting captures Davis well as he plays a highly skilful shot.

Pair of Oil Paintings Of Hunting Spaniels On Board