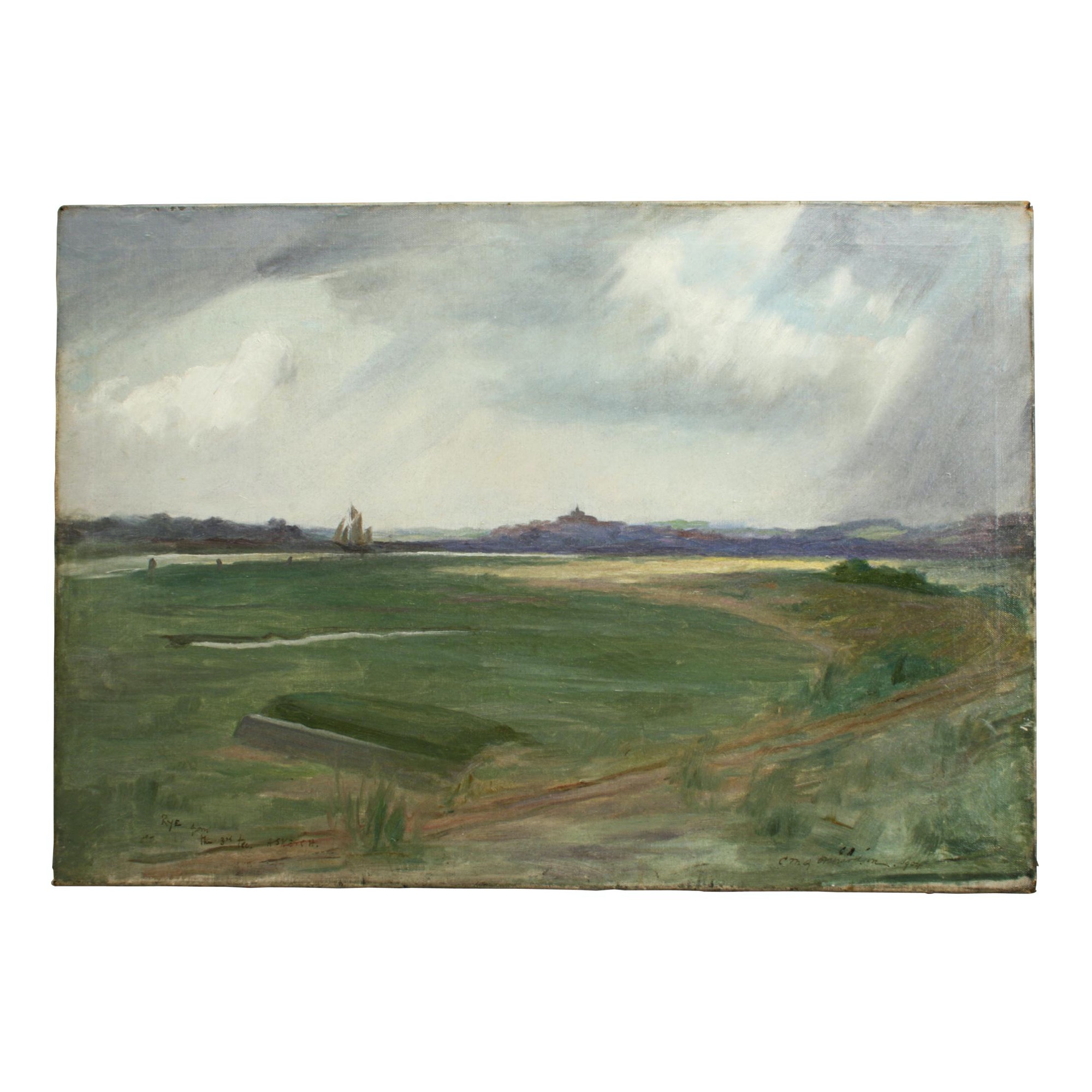 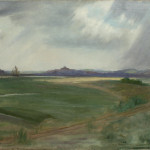 Golf painting,"A View of Rye Harbour - Rye from the 3rd Tee " Oil on canvas . Signed and dated Charles M. Orchardson 1904.
The artist was the son of Sir William Quiller Orchardson and exhibited 15 works at the R.A. between 1896 - 1904. He was a member of the Royal Institute of Oil Painters and died in 1917 of war wounds.

In the early 1890s, golfers in the Rye and Hastings area discussed the possible creation of a golf course at Camber. A meeting held at the George Hotel in Rye on 28th November 1893, decided that 'a Golf Club should be formed; links to be situated over the Camber sandhills'. Work started immediately, a course was laid out and the first competition took place in February 1894.

The Rev J.L. Bates, Rector of Iden, was an active Chairman of a committee co-ordinating the construction of the course and organising the newly formed club. H.S. Colt, a solicitor, was elected as the first Captain and he designed 18 holes in 1895, which became the permanent course. This set him on a new career as a golf course designer of national and international renown.

The adjacent Royal William hotel, then no more than a wooden shack, provided accommodation and meals until a temporary clubhouse was built in 1894. The 'temporary', much altered, building is still in use today.
By the end of the century there were over 250 members, many from London. Lady members were admitted from the start, 32 being enrolled in 1894. The Club prospered in the early years and became well known as one of the leading golf clubs in the south of England. It counted among its members a Prime Minister, a Cabinet Minister, eminent judges and leading advocates. The famous golf writer Bernard Darwin, who became Captain in 1906, sang the praises of Rye whenever possible.

In 1899 the newly created Oxford and Cambridge Golfing Society accepted an invitation to play their home matches at Rye and the varsity match was first played at Rye in 1911. The special relationship with Oxford and Cambridge exists to this day.
Transport to the club before the days of the popular motor car was solved by the opening of the Rye and Camber Tramway in 1895. The 1¾ mile journey from Rye to the Golf Links Station took 8½ minutes and cost 6p return (first class). The steam tram lost passenger appeal to the motor car in the mid-twenties and, after use by the Admiralty during WW2, the company was quietly wound up.

By 1905 there were 430 men and 60 lady members. The 'temporary' clubhouse was expanded until, by 1911, the outline of the building had assumed its current, much-loved shape. Simple fare was offered in the clubhouse: a cold luncheon supplemented by buttered eggs became the Club's speciality.

In 1907, redesign of the course took advantage of the receding sea by using land to the south of the sandhills and lengthening Colt's original layout. Two holes were still across the road and three holes remained on land beyond the coast guard cottages.

The Club was now flourishing; even the First World War did not check its progress. It is said that the guns on the Western Front could be heard in Rye but they made little impact on the Golf Club. Several members of the ground and house staff were released to join up but play continued and lunches were served at 'the Billy'. After the war, play soon got back to normal and Rye became a favourite course for leading amateurs of the day.

Antique Shooting Print By Arthur Wardle, On the Covert Side.

Antique Fishing Prints by Lance Thackeray, Catch Of The Season